Thursday's Review: The The Plantagenets: The Warrior Kings and Queens Who Made England by Dan Jones 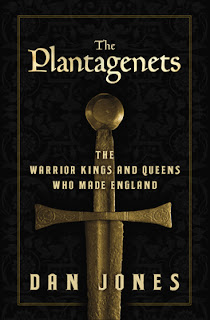 A Copy of this book was provided by the publisher in exchange for a review.

I am a self proclaimed history geek.  Although my first love was, and always will be, Historical Fiction, over the years I have developed an intense love affair with many well written History books of the non-fiction variety.  I have said many time, on here no less, that a good Historical Fiction book should peak my interest and make me seek out factual books on the given subject to fill in the gaps and give me the "true" picture.  As a result, I am always excited when I found one of the said History books that I can not only enjoy, but recommend.  The Plantagenets: The Warrior Kings and Queens who made England  by British historian Dan Jones is just such a book.

When it comes to history, nothing is more fascinating to me than the history of the families designated as Royalty and their nobles.  If you look throughout history, there are not many families or dynasties that you can find who would be more fascinating than the Plantagenets.  From the beginning of their rule in England in the 1100s, to the splintering of their family into the Lancasters and Yorks, and on to the takeover of England by the Tudors, the Plantagenets have had a huge affect on the history of England and Great Britain.  To me, they are the dynasty that all other Royalty, English and other, are measured by.

Dan Jones' book begins with the death of Henry I's son William and the demise of Norman rule in England. From there he deftly covers the history of the Plantagenet Dynasty, ending with Henry Bollingbrooke's takeover as Henry IV and the end of the reign of Richard II.  Here is a family full of heroes and heroines, crusaders, thieves, murderers.  Their lives had tragedies and triumphs.  At times they were both brilliant in their rule and careless in their mistakes, but through it all, they made England into a force to be reckoned with.  Dan Jones captures all of these events and their consequences and impacts, and he does it with a writing style that reads more like a good story than just the listing of facts and dates.  That is perhaps the best thing about this book.....it reads like a good story, not like a textbook.  I became so engrossed in the lives of the various members of this ruling family, that I would find that I had been reading for an hour or more without realizing it.

In the end, I enjoyed this one so much that I actually spent the $25.00 to buy myself a hardback copy to read and re-read at my leisure.  I can say, that almost never happens when I am given a book to read for review.   Dan Jones' book, though, is the kind of book that I can see myself enjoying more than one, while also using it as a reference on the Plantagenet Dynasty.  My only complaint was that the book ended too soon, leaving out some of the more familiar members of the family.  Although I understand the reason to stop at the point that this books ends, I am holding Dan Jones to his "promise" of  a second book to finish the tale.  I am highly anticipating this second book, and only hope that he meant what he said about writing it and that it comes out soon.  This book is highly recommended by me to anyone who is interested in the history of the ruling families of England, but of England and Great Britain itself.

Posted by lsmeadows at 4:20 PM