Review: DragonFly by Charles A. Cornell 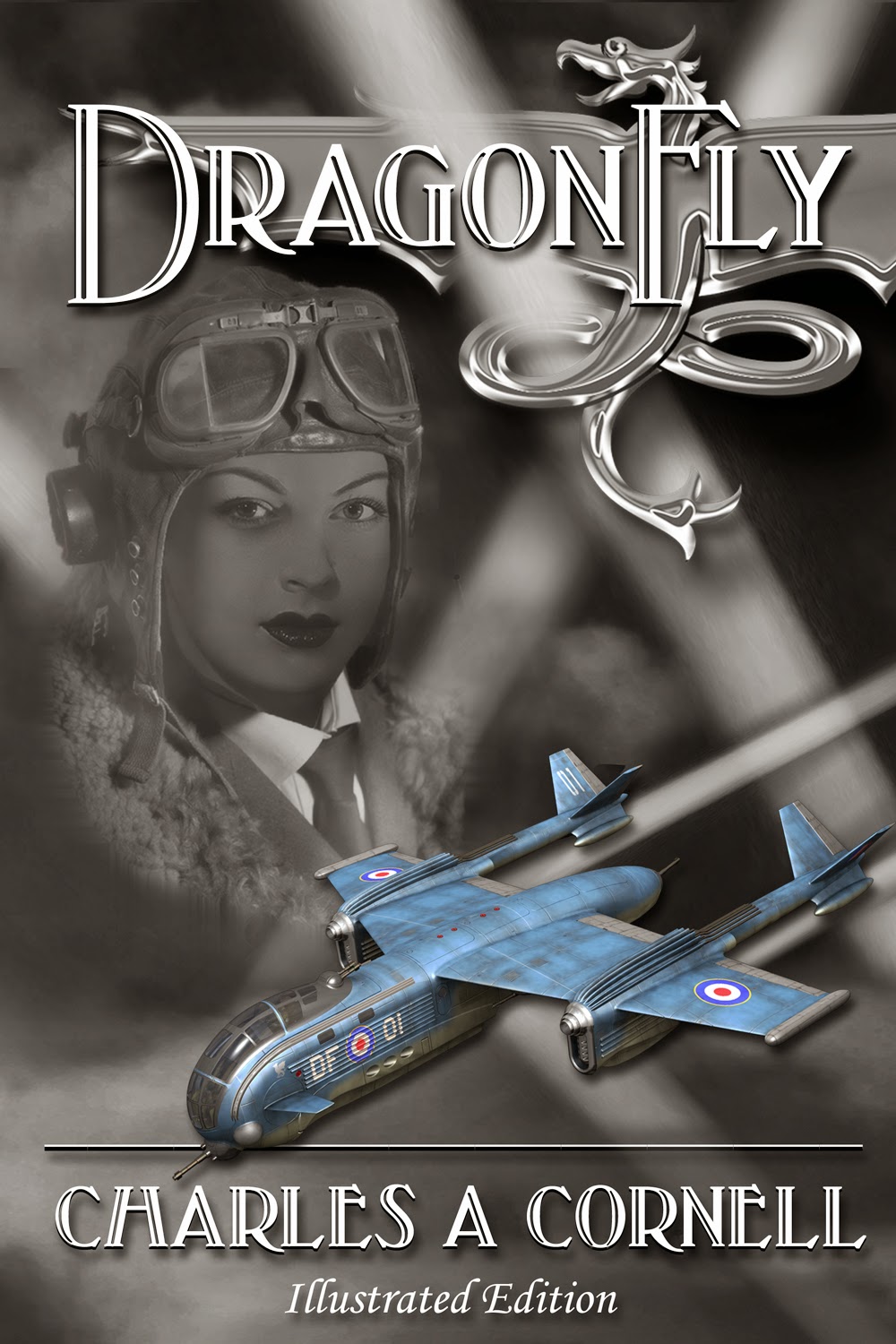 I think that the best way to describe this book is "delightful".   Veronica "Ronnie" Somerset is a female RAF pilot during WWII.  The Nazis are about to start the invasion of Britain and Ronnie is trying to get the support and attention that she deserves from the male dominated British Royal Air Force.  The RAF, on the other hand, is trying to minimize her role.  They think they have succeeded by stationing her at a remote base in Cornwall that is shared by the RAF and the Navy.  In actuality, though, they have placed her in the perfect place to play a pivotal role in the fight for the UK.

I have to say upfront, I am new to the genre of Steampunk/Dieselpunk, but with each book of this type that I read, I am finding that I really enjoy it.  To me the genre is all about mixing sci-fi (as far as the machines, etc. go) and magic or mysticism, which DragonFly by Charles A. Cornell does in just the right amount.  The book is full of imaginative machines, the best examples of which in my mind, are the DragonFly planes and Blitzkrieger.  These are just two of the really imaginative and inventive items included in the story, though and all of them are fun to read about and consider.   On the magic side, there is a bit of Druidism and some thought telepathy that represent this aspect quite well.

No story can survive, though without a good plot, and the good vs. evil plot of DragonFly is excellently drawn. Set in WWII, the outcome of the story should be etched in history, but this is "alternate history" and the author is free to take the story where he will.  He does this in admirable fashion, keeping the reader on the edge of his seat trying to decide if "good" will triumph over "evil".  As a self-titled aficionado of history, I really appreciated the way that Cornell wove the just the right amount of the factual history of WWII in with his fantasy story to give it a strong foundation, yet allow it to be unpredictable.

I think my favorite part of this book, along with the DragonFly plane itself, were the characters.  There were so many characters in this book that I thought were exceptionally well done.  I loved the fact that the RAF pilots were all women and had to fight for the chance to play a part in history.  As for the rest of the British characters, they came across as a unique blend of British stability and optimism.  The Germans, on the other had, were very dark, their plodding steps, ulterior motives, and subterfuge painting the perfect picture of the stories "evil".  If there was one thing that was off in Cornell's characters for me, though, it was the origin of the Blitzkriegers, which was a little hard for me to wrap my head around.

I would definitely like to thank both the author, Charles A. Cornell, and the E-book Miner group on Goodreads for bringing this book to my attention.  If not for them, I don't know that this book would ever have made it onto my radar, but I am very glad that it did!

Posted by lsmeadows at 7:07 PM No comments:


I can't believe that I am actually saying this, but I am glad to see the summer ending and fall beginning.  With fall comes the return of routine, which I am finding that I need more and more as I get older.  The days of flying by the seat of my pants are over for me, I think.  This summer has been a particularly hectic summer in my family, which definitely had a negative effect on my ability to keep up with the blogging.   Some of the events were scheduled, some not.  Some of them were happy events, some not.  All of them were draining, that is for sure.  All of this explanation is by way of apologizing to those who have been wondering where I have been for the last three months.

Although the summer's events definitely had a negative effect on my blog, it only had a minimally negative effect on my reading.  There is nothing like a good book when you are sitting around waiting for a graduation to start, news from a doctor, phone calls from family members, games to be finished, etc.  Below is a list of the books that I read this summer, complete with star ratings.  Most of them have reviews pending, which I will be working on in the next few weeks.

Hope you all had a happy and successful summer, and here is to getting back on track.

As you can see, it has been a good summer of reading and I certainly have my work cut out for me.  My first review will be of DragonFly by  Charles A. Cornell, a steampunk adventure set in WWII that I found really entertaining.  It should be on the blog in the next day or so.

Hope you all had a great summer for reading!

Posted by lsmeadows at 5:53 PM No comments: