Review: The Map Thief: The Gripping Story of an Esteemed Map Dealer Who Made Millions Stealing Priceless Maps by Michael Blanding 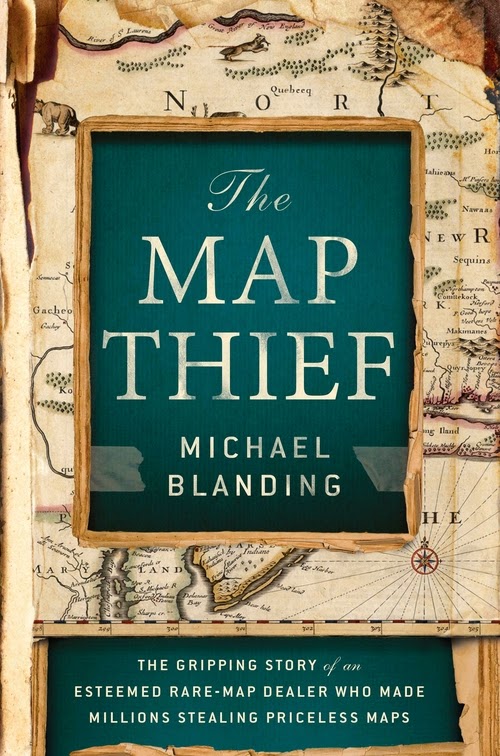 In his introduction to the book The Map Thief author Michael Blanding writes, "Maps have long exerted a special fascination on viewers-both as beautiful works of art and as practical tools to navigate the world."  What he forgets to mention is that they can also be snapshots in history.  For me, they are all of the above, so a book centered around historical maps seemed a natural.  Add to that my fascination with true crime accounts, and it is no wonder that I jumped at the chance to read and review this book.

The Map Thief  is Blandings account of  the E. Forbes Smiley case, Smiley was a respected dealer in antiquarian maps who ended up in over his head and began stealing rare and famous maps from Universities and selling them on the market as new finds until he was caught red-handed cutting a map from a book in the Yale University antique map room.  I found the idea that a trusted, well respected member of the exclusive trade in antiquarian maps could take so much advantage of the other players in the industry fascinating.  After all, for years E. Forbes Smiley was able to pull the wool over the eyes of top-notch dealers in antique maps and savvy collectors, not to mention the major Universities and Museums that he was able to steal from.  I really enjoyed reading about Smiley and his crimes.

For me, though, the best part of the book was the amount of time that Blanding spent explaining the maps that were stolen and their significance.  As you might expect from an investigative journalist of his caliber, the discussion of each map was well researched and well written.  His ability to highlight the importance of these maps as both historical documents and works of art really drew me in.  I learned so much about maps, their uses, the history of map making, and the historical figures behind the maps.  I would have loved for this part of the book to never end.  Blanding did such a great job with this part of the book that I found myself researching antique maps and the history of map making on my own.

The only place were the book fell short for me was at the end.  Throughout the book, there was a lot of discussion of the fact that hundreds more maps were missing that Smiley ever admitted to stealing.  I felt it was presented in such a way that a revelation would be forthcoming, but perhaps it was just my reader's wish that there would be a big reveal.  At any rate, not only was there no real new information about these missing maps, I felt that Blanding really glassed over this portion of the story. It was almost like he just threw the information into the book at the end and as a result, I thought it detracted from the rest of the book, which was really great.  In  addition, I found the information that was presented confusing.  For me, it would have been better if Blanding had mentioned that many more maps were missing, and the theories by all parties about what might have happened to them, in a short concluding chapter.

All in all, though, this book was really worth the read.  The information regarding maps, map making, and map collecting was enough to keep me interested to the very end.  Throw in E. Forbes Smiley, his personality, and what he was able to accomplish, and you have a very engaging read.  I would highly recommend it to any one with a love of history and a love of true crime stories.  Bravo Mr. Blanding!
Posted by lsmeadows at 5:38 PM 1 comment: