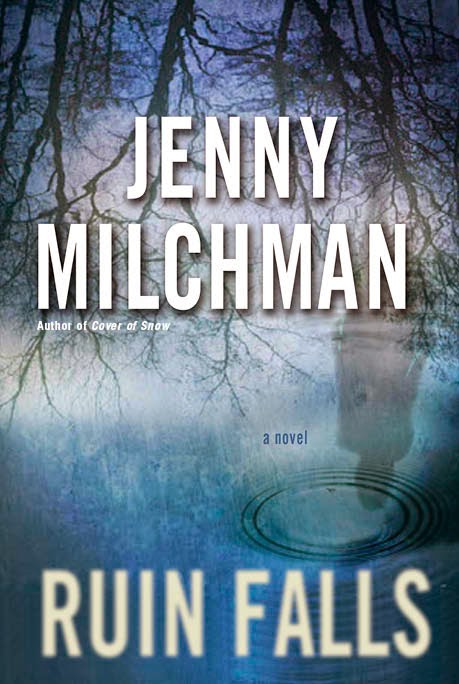 I enjoyed Jenny Milchman's first novel, Cover of Snow, so much that it was hard to imagine how she could do any better on her second outing.  With Ruin Falls, I certainly got the answer, and it was "very well, thank you".  In fact, I thought Ruin Falls was even better than Cover of Snow.  I have to say, I really love it when I find a new author and their books get better and better, so I hope this is a trend that will continue.

Ruin Falls is the story of Liz Daniels, who leaves her secluded home in the Adirondack Mountains to go on a family vacation for the first time in years.  When her husband, Paul, changes their plans and decides to stop at a hotel for the night, everything seems fine.  It is when Liz wakes in the morning to find her children are missing that we get a glimpse of the way Liz's life is headed.   Then when she finds out that the person who took them is someone that she thought she could trust, we really understand how badly her life is going to fall apart.  Undeterred, Liz hits the road on a journey that will hopefully allow her to find her children and bring them home safely.

As a story, Ruin Falls is all about layers.  Layers that at times make the story seem ambiguous, but in a good way.  Early in the first few chapters their are two events that clue the reader in on the fact that all is not what it seems for the Daniels family.  The first is the sheer panic that comes over Liz when the family stops for snacks at a fast food restaurant and six-year-old Reid wanders away.  As Liz and Paul search the place for him, I got the feeling that her panic was more than the norm for a mother with a missing child. Then as they get back on the road, they are accosted by a crazy pick up truck driver who seems to be having a road rage event.  I loved the sense of innuendo in these and other scenes that appeared throughout the book.  It really set the tone for me and got me thinking about just where the story was going and what was really going on, a feeling that stayed with me until the end.  In this same vein, I really enjoyed the interspersed chapters that introduced other characters that appeared to have no connection to the Daniels family.  Rather than confuse or distract me, I found myself wondering what the connection was (I was sure there was one), which in turn kept me anxiously turning the pages.  As the story progressed, and the layers were peeled away, I enjoyed watching it all come together.

As a mom of two boys, I found myself really identifying with Liz.  Although I hope it never will, if something like this ever happened to me, I would hope that I would be just as focused and driven to find answers as she is.  Liz is by far the character that the book focuses on the most, and therefore she is the one that I felt I learned the most about.  Most of the other characters were definitely secondary, and while I would like to ave learned a bit more of some of their stories, I don't think more detail on them would have improved the story at all.  In fact, with all the layers of the story, keeping the character development rather simple really worked for me as it allowed me to stay focused on why the children were taken and how Liz was going to get them back.

I give this book 5 out of 5 stars, mostly because it was a delight to read and kept me engaged from beginning to end.  I will be the first one to complain when authors muddy a story with too many devices, but for me, the layers of this story and the outlying characters only enhanced my enjoyment.  I highly recommend this book to everyone who likes a story that keeps you guessing where it is ultimately going to end up.
Posted by lsmeadows at 7:19 PM No comments: