A copy of this book was provided by the publisher in exchange for a review. 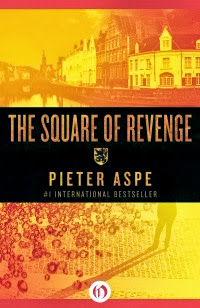 The Square of Revenge is the first novel in the Van In mystery series by Dutch author Pieter Aspe.  Since I was not familiar with the author, I looked him up to see what other books he had written, there was a long list, most of them not in English. This leads me to believe that he is an established author trying to break into the US market.

The premise for the book sounds intriguing.  A wealthy jeweler has his store broken into.  Instead of stealing anything the burglars dissolve his entire inventory in aqua regia, a substance that supposedly can melt even gold.  In addition, they leave behind a scrap of paper upon which is written four words in the situated in the form of a square.  Why would the burglars vandalize the shop, but not take anything?  What is the significance, if any, of the square of words. To Detective Van In and DA Hannelore Martens this crime seems to be very personal.

When I decided to try The Square of Revenge, I wasn't sure what I would find.  From the synopsis, I thought this might be a "conspiracy mystery" book, similar to those of Dan Brown, Steve Berry, and Brad Meltzer, of which I am a big fan.  If not that, I was hoping for a good nordic noir mystery, based on the name of the author and the language that this book was originally released in.  In reality, though, this book did not fit into either of those categories.  It was more of a standard detective mystery in the style of Agatha Christie's Hercule Poirot books, or Nelson DeMille's John Corey series.   As such it was a good story with engaging characters and an interesting mystery.  For a number of the characters in the story I was not sure what their role was or why they were relevant until closer to the end.  I like this about mysteries as it keeps me guessing and that keeps me engaged.  I was a bit disappointed, though, that some of the connections hinted at in the beginning of the book were never really addressed, though.  In addition, there were several devices in the story that I felt the author could have given a bigger role, but which I cannot enumerate without giving things away.  It was unfortunate that some of these items were ones that I was most interested in at the beginning, they had such promise but turned out to be nothing, really.

I would still recommend this book for mystery buffs, but just be aware that it is a straight up mystery.  It is neither big on the suspense, nor would I call it a thriller.  As a mystery, though, it is an enjoyable and good read.  I intend to seek out other books in the series if I can find them in English.  I am interested to see how Van In and DA Martens progress and to learn more about their back stories.
Posted by lsmeadows at 5:46 PM