Monday's Review: The Daring Ladies of Lowell by Kate Alcott

A copy of this book was provided by the publisher through Edelwiess in exchange for my review. 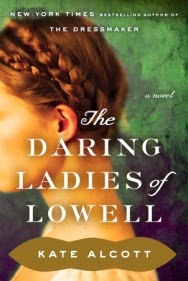 Kate Alcott's second historical novel, The Daring Ladies of Lowell is set in the town of Lowell, Massachusetts during the 1830s.  Lowell is one of the East Coast towns that were famous for the cloth mills that populated the area and were infamous for their "sweatshop" conditions.  Alice Barrow is a farm girl who travels to Lowell to begin work in the mill.  Once she has found a dormitory with an extra space, she settles in and begins her career as one of the "mill girls".

There were several things that I enjoyed about this book.  First of all, I enjoyed the mix of characters included in the cast of mill girls.  Kate Alcott did a good job of including characters whose personalities were as varied as the girls themselves were.   Among Alice's friends and dormitory sisters we find the religious, the studious, the goody two shoes, the adventurous, and those that just wanted to have a little fun.  Another way that Kate Alcott's portrayal of the mill girls was spot on was in the way that she portrayed the juxtapositions of their lives.  Although the living and working conditions are harsh, they are much better than those that most of these girls came from, mostly because for the first time in their lives, they are able to make decisions for themselves, at least on some level.  I thought that the way the allure of their lives was contrasted with it's bleak realities was quite well done.

Another aspect of this book that worked for me was in the portrayal of the mill owner, Hiram Fiske.  Like so many of the men in his position, Hiram was a mix of characteristics.  Although he was getting rich off of the backs of the mill girls, at times he was honestly able to convince himself that he was making their lives better.  And just when he was about to convince you that he could do the right thing, his greed would rear its ugly head and he would become a man whose only purpose in life was to make his business more profitable than his competitors, no matter who was hurt in the process.

Another great plus to this book was the fact that the murder and subsequent trial that were interwoven through the story were based on an actual event.  I always love when a historical book uses actual events to tell a fictional story.  It not only shows that the author did some research on the subject, but for me it makes the story have more impact.  In the case of this story, also, the murder and trial were the perfect devices to illustrate the realities of  the lives of the characters.  Not only were we able to see how the mill girls would eventually band together for their joint benefit, but using the trial to showcase the thinking of the mill owners at that time was wonderful.

What didn't work for me, though, was the romance side of the story.  I will  be the first to admit that I don't mind a little romance with my history, but in this case, the romance presented just did not ring true. A romance between the mill owner's son and one of the mill girls was just too fanciful for me and took away from the realistic feeling of the rest of the book.  I would have found it much less distracting if the romance would have developed between Alice and the town doctor, or someone who lived in Lowell, but wasn't a mill worker. In fact, I would much rather have had more of the story about the mill girls, their lives,  and their working conditions.  Alternately, I would have been happier if more of the story would have been centered on the mill owners and their justifications for their behavior, or about the murder and trial.

Having read a few other books that were similar in character to this, I found the underlying story was good, but could have gone farther.  However, I would still recommend this book for those who are interested in reading about the women and girls who worked in the mills, especially if you like a bit of romance with your history.
Posted by lsmeadows at 3:47 PM