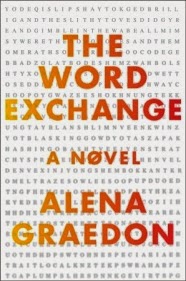 The Word Exchange, the debut novel from author Alena Graedon, has been called "the dystopian novel for the digital age" and "inventive" and on some levels I agree with those descriptions.   I loved the idea of The Word Exchange, which is set in the near future and deals with the constantly forewarned death of print media.  Anana Johnson and her father Doug are working on the multi-volume third edition of the North American Dictionary of the English Language when Doug goes missing one night.  As Anana searches for her father, entries in the dictionary start disappearing, and people begin to succumb to a disease that is dubbed "the word flu" and makes them talk in gibberish.  Where is Doug Johnson?  Who is behind "the word flu"?

There were so many things that I enjoyed about The Word Exchange.  As I mentioned above, I loved the idea of the book.   More than just a book about the death of print as a medium, this book actually goes farther to imagine the death of the English language as it is today.  The allure of that premise drew me in immediately, and I felt that the basic story line held up to my expectations.  All of the elements of a good dystopian story were there.  Megacorporation Synchronic was plausible as the Big Brother figure, as was The Diachronic Society as the rebels fighting to preserve the current way of life, Anana as the plucky heroine, and Bart as her sidekick.  Even the smallest of characters, like Vera and Victoria Marks were given interesting backgrounds that drew me to them. I think my favorites, though, were Phineas with all of his quirks and idiosyncrasies, and Max.  My only detraction here was that I felt that the story went on a little bit too long. On story alone, though, I would give this book a 4 out of 5 stars.

Where I felt the book lost it was in the execution.  The author uses a number of devices to illustrate the underlying philosophy of the story; that society is becoming immune to the finer points of the English language, but I felt that she tried to be too clever and that, on a whole, these devices ended up detracting from the story rather than enhancing it. The one that I felt worked the best was the way the chapters were organized by the letters of the alphabet.  The inclusion of a word and definition at the beginning of each which gave an overview of the main points of that chapter was really good.  In fact, that is  the only device that I felt really worked.  On the other hand, the author's use of obscure words unfamiliar to the average reader, while clever, was a huge detraction from the flow of the story.  I consider myself to have a good vocabulary and I ended up having to look up upwards of 50 words, so many that I actually lost count.  Eventually I began to think how lucky I was to be reading this on an e-Reader, with a dictionary definition just a touch away.  While this may have been the author's attempt to point out how easily technology can suck you in, to me it just seemed like the author was actually touting that which she was supposed to be warning against.  Another device that totally did not work for me was the actual printing the gibberish that people began to speak as "the word flu" spread.  In the beginning it was interesting, illustrating how intrusive electronic devices have become in our society.  As long as these gibberish words were kept to a minimum and it was easy to still figure out what the character actually meant to say, it was okay.  After a while, though, it got old, and was so pervasive I ended up skipping whole pages, and toward the end, one whole chapter.   While I understood that these devices were part of the plot of the book, I felt that the average reader would find them cumbersome and could find them enough of a distraction to actually give up on the book altogether.

Taking everything into consideration, I did enjoy this story on many levels.  I can see a certain market for this book with just the right readers.  I can't see a mass appeal for it, though, and for that reason I don't feel that I can recommend it to everyone.  I will, however, recommend the book to certain  of my reading friends, but that pool is unfortunately pretty small.  I would like to see what this author could do with something a bit more mainstream.

Posted by lsmeadows at 2:57 PM