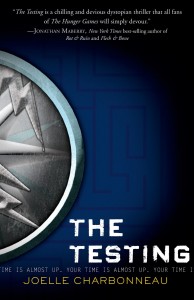 Book furnished by Publisher in return for review

Whenever a book becomes hugely popular, there are bound to be a lot of copy cat books that occur. With the huge success of The Hunger Games, the market has been inundated with dystopian books targeted to the Young Adult market. In that respect, The Testing by Joelle Charbonneau is no different from the rest. It is definitely a book based on the very successful formula used in the Hunger Games trilogy. There are, however, some differences. These differences, coupled with the author's obvious talent for writing, make this one copy cat that is well worth the read.
The Seven Stages War has left the Earth devastated. It is in this environment the the new United Commonwealth finds itself trying to survive. To meet this goal, the UC needs to discover the best and the brightest that its various colonies have to offer. Their talents and skills, along with a coveted education at The University, are needed to rebuild the Earth. To aid this process, the government of the UC has devised The Testing.
Like the Hunger Games and others, the story in The Testing relies on Young Adult protagonists who are thrown into a do or die situation which they must navigate by using their skills and intellect. Another similarity to most of the books of this type, their is romantic interest between some of the characters. The most important similarities to the Hunger Games, though, is the author's ability to craft characters that the reader can identify with. People that you want to win and survive. In addition, the author's ability to tell the story in an engrossing, intriguing way that draws the reader in is another similarity.
To me, though, the similarities that this book had to the others, especially the Hunger Games, were less important than what it had that its differences. Although survival is a big part of this story, it is not the only attribute that is important. For example, I really liked the way that The Testing was structured. I found the author's use of testing environment that looked at the participant's academics, decision making abilities, problem solving skills, and team work skills, set this story apart. The fact that the characters needed more to accomplish their goals than just survival skills was more to my liking. In addition, I really liked the way that the author included the understanding of several scientific abilities in the main characters arsenal, and the fact that they were able to discuss these abilities amongst themselves. There were some other differences that I particularly liked as well, but most of them were things that would spoil the story if I listed them. All of these differences, though, went a long way toward allowing me to feel that this story had its own identity.
Even though I knew where this book was heading, could guess most of the twists, and was not surprised by any of the situations, I really enjoyed this book and am looking forward to reading the rest of the trilogy. In fact, I found it as enjoyable as the Hunger Games and think that the fact that the stories are so similar one of the things that I particularly enjoyed. Reading this story felt like visiting an old friend, but yet there was plenty to discover at the same time. I give it 4 stars.
Posted by lsmeadows at 4:09 PM