Thursday's Review: What Matters Most by Bette Lee Crosby 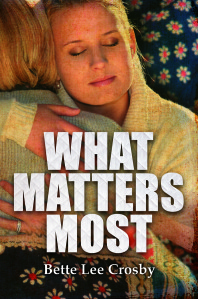 There is just something about a Bette Lee Crosby book that allows the story to just slide off the pages. I think that I have read almost everything that Bette has written, and thoroughly enjoyed them all. What Matters Most is another enjoyable and charming read from this master of southern literature. Louise and Carl have an established life in New Jersey. He has worked at the local bank for his whole working career, she has successfully raised two children and is active in the local scene. That is until Carl's Uncle Charlie leaves them a house in Florida. Suddenly their life is in upheaval.Like all of Bette's books, this story was easy to get into and flowed quickly for me. She has a wonderful voice which makes me feel like she is sitting in front of me telling me the story, rather than being miles away while I am reading her book. In addition, Bette's characters are always full of personality and pizazz. There were several characters in this book that really fit that bill, and although I had a bit of a hard time identifying with the main characters of Louise and Carl, there were several supporting characters who I identified with right off the bat. It's not that Louise and Carl were not great characters, they were. It was just that, in the beginning, they were not very likable. In fact, I remember thinking several times that they had to be the most self centered, clueless people in the world....but that was the point. As usual, Bette painted this picture in a true to life way that everyone can enjoy. As I said, overall this book was thoroughly enjoyable. The story itself was told with Bette's customary charm and wit and the characters were incredibly real. My only regret is that I only have one more of Bette's books left to read. I can only hope that she writes and publishes more soon, so I don't have to wait too long.
Posted by lsmeadows at 6:55 PM