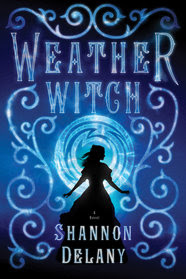 In 1844, the New World is a closely regulated place where your Rank is everything, steam power has been suppressed, and everything runs on stormcell crystals.  In this world, the Weather Witches are the key that makes everything run.  They are the ones who control the weather, their power runs the stormcell crystals that make everything run, and they are the Conductors of the huge airships that transport people and things from place to place.  They are also enslaved by the powers that be and, as far as Rank goes, they are the lowest of the low.  In this world, the Astraea family is one of The Nine, the highest ranking families who run the country, and Jordan is their youngest member.  On her 17th birthday, she is accused of being a Weather Witch and taken into custody.

Weather Witch is the first book in the Weather Witch series by established author Shannon Delaney.  Delaney's other series, 13 to Life, is a highly popular Young Adult Urban fantasy series with Werewolves as the central characters.  Although I have not read any of the books in that series, knowing that it exists did come into play when deciding what I thought of this book as the flaws were things that a novice might be forgiven, but an established author should be able to avoid.

The premise of this book had a lot of promise, and for the most part, I think it lived up to expectations.  I found the characters in the book interesting as characters.  They were true to their purpose, the tragic heroine, the reluctant hero, the evil master, and a whole host of backstabbing characters.  There was even a misunderstood character who we do not quite know yet on which side he will land.  All of this makes for a fun fictional romp, and for most of the book that is what I got.  As I read I found myself feeling bad for Jordan, wanting Rowan to become all that he could be, hoping things worked out for Bran and his family.  I would say, on the whole, both the characters and the story line worked.

As I said, above, though, there were a number of things in this book that didn't work and most of them, I think, center around the fact that this is the first book in a series.  As such, I feel that the author was a bit too ambitious.  A number of people have mentioned that the shear number of characters and story lines are confusing.  I did not have trouble with that on a large scale, but there were a few things that I felt did not need to be included.  For one, the focus on Jordan's mother, Lady Astraea, seemed to be an unnecessary side story.  In addition, Sybil's story should have been given either more detail or less.  Then there were two characters that appeared at the end of the book that just seemed out of place.  They appeared, but there was no mention at all as to what their role was.  Knowing this was the first book in a series, you could surmise that they were to play a role in the future, but it would have been better to explain a bit about them, or to leave them out entirely for now.  Their presence just added confusion to the end of the story for me.

Perhaps the most glaring thing that did  not work for me, though, was the end.  The book just ended........I know this is the beginning of something and there is more to come, but the author had just introduced two new characters (well, okay, one was reintroduced) and there was absolutely no slow down or phasing out of the story.  I know that authors like to leave series books with a cliff hanger, but the ending of this story didn't even qualify as that, to me.  It was as if the author decided that was enough for this book and the next paragraph would be in the next book.  It actually caught me so off guard that I did some research to make sure that my copy wasn't missing the actual end of the book.  My second reaction was to be frustrated enough that I don't know if I will even read the second book of the series, and up until that point I thought I would.

I have read, and am reading, several series currently.  Some of them are young adult and some are not, but none of them have ever had such an abrupt ending for me.  Usually there is some sort of wrap up and you can tell that this installment is coming to an end.  Basically, if it wasn't for the ending to this book, I would be looking forward to the next one and it would have gotten a 4 star rating from me, perhaps a bit more.  In my opinion, the author need to do some work to correct these errors before she publishes the next installment to the series.
Posted by lsmeadows at 3:02 PM