The Girl who swam to Atlantis by Elle Thorton 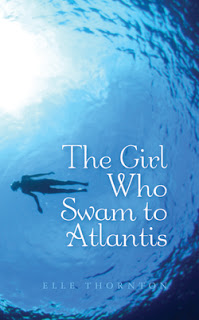 With all of the "boy meets girl" and fantasy YA books out there, it is always refreshing to find a book that deals with a more serious issue. The Girl Who Swam to Atlantis by Elle Thornton is just such a book. Gabrielle Winter is 13, and like many 13-year-olds, she is not sure of her place in the world. Complicating matters is the fact that Gabrielle is spending the summer at an Army base in North Caroline where her father, a general, is stationed. It is the summer of 1957 and racial tensions in the area are high.

This book was an excellent, easy read. Elle Thorton does an great job of capturing the angst of a 13-year-old trying to define who they are in the world. In the character of Gabrielle, she balances just the right amount of insecurity and exploration. For me,though, it was Gabrielle's naivete of the racial tensions that were prevalent in the South at this time that was the best part of her character. I really liked the way that Ms. Thorton used that naivete to explore the issue of race relations in the 1950s South. I thought that this exploration was done with thoughtfulness and care, exhibiting a good balance of the good, the bad, and the ugly.

If I had one complaint about the book, it would be that the author did not go into enough depth on the subject. I am aware that the target audience for this book is the middle school crowd, of which I am not a member, but even so, I felt that Ms. Thorton could have fleshed the subject out just a bit more. As it is, she touches on many subjects that will hopefully entice the young minds to explore the subject further, and that is a plus with me. I would class this book as an excellent read for the 11 - 14 age crowd. In addition, I would suggest that parents read along with their middle schoolers and perhaps use this book as a jumping off point for discussion. As such, I think this book is an excellent choice and am giving it 4 stars
Posted by lsmeadows at 3:01 PM